Notes for the show by Sally McInerney, September 2015

Nauru Diary: Impressions of an island. 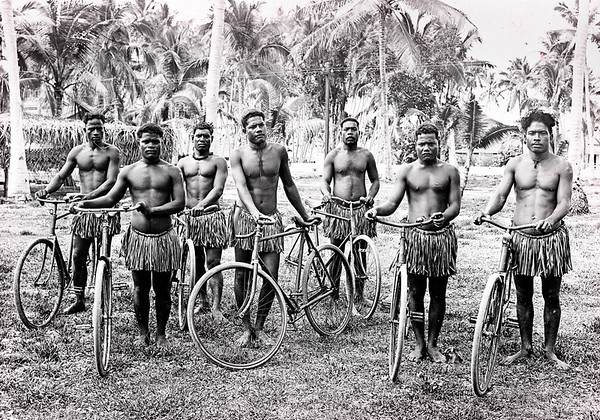 It takes a cargo ship about 20 days to get from Sydney to the little island Republic of Nauru, just south of the Equator. From Brisbane, it’s about ten days. Nauru’s nearest neighbour is the tiny island of Banaba, 300 kilometres to the east, named Ocean Island in the age of guano empires. A four-and-a-half hour flight on one of Nauru Airlines’ 737s, departing from Brisbane, is the only other way of getting there from here.

My first visit to Nauru was in November 2014. I had a friend who was working there at the time and a $50 tourist visa. I booked the most flexible ‘plane ticket of all, in case it was a nightmare landscape riddled with phosphate dust, with perhaps a few seabirds clinging to life among the pinnacles of the hinterland.

Apart from an archaeologist friend who had spent several days there in May 1977, I knew nobody who’d ever seen much of Nauru. From field trips to other Micronesian islands I’d learnt not to trust guidebook descriptions. So many things were being publicly said about Nauru and most of them were derogatory. It was called a barren moonscape, a pile of bird-shit, a hellhole, a failed state, a decrepit country, a clapped-out quarry, even “Scott Morrison’s wretched island”. Yet twelve thousand humans were living there: about the same population as, say, Cowra, my home town. About fifteen hundred of them are refugees, ten thousand are Nauruan. How do they live on such a small remote island, twenty-one square kilometres shaped like a kidney bean? I wanted to wander about in my usual way, in accord with my “artistic practice”, looking at everyday things, talking to strangers: the grainy texture of being there, the odd scraps that the senses gather to puzzle the mind; besides, I had always wanted to see the pinnacles in the mined-out phosphate fields.

I stayed on Nauru for six days. I took photographs, kept a sort of diary. I saw many old rusting vehicles (a fortune in scrap metal) but never the infamous yellow Lamborghini which crops up repeatedly in patronizing palangi internet stories about Nauru. There were many other mysteries.

What had happened to the museum full of relics from the three-year Japanese occupation during World War II? How long ago did the public library burn down, and what had been in it? – there are so few books in the tropics, eaten by insects and mildew. Was it true that the airstrip had been built of crushed coral by the Japanese? Why was there a trampoline in the yard of almost every house? Were those enormous dilapidated buildings, part-covered in vegetation, still being used in phosphate production?

What of the dogs who killed an eleven-year-old Nauruan girl on the beach a few months before? What had happened to the family of the Nauruan who drowned in the Anibare Channel, attempting to rescue a refugee who also drowned? How were they managing? When refugees said that they were in Hell, touching their lightly-clenched knuckles to the ribcage over their heart, was it the island itself that they meant, or mostly the mind-bending state of uncertainty in which they found themselves stranded?

Where were all the seabirds, descendants of the myriads that built up the phosphate soil? Why did so many children stay away from school? What was it like at the University of the South Pacific’s Nauru campus, with a forecourt of white coral near Noddy’s Soft Drinks factory: “Be Nauruan, Buy Nauruan”? Book-starved, I tried a door at the campus marked “Library”, but it was Saturday, the door was locked.

The ‘plane I flew out on was full of teachers and interpreters returning home after a long shift at the detention centre. One of them said she was planning to sleep for a month and never go out of doors.

Down by the Anibare pool I had become friends with some people who could not leave the island. I said I’d come back; I wanted to return. There is something about Nauru that reminds me of my childhood home. Maybe it’s the small interconnected community and the old rusting car bodies. And I think it has a feisty democratic soul.

When I returned to Sydney I searched in the Mitchell Library for details about Nauru’s recent past. I found a trove of South Pacific photographs and papers collected by Ron Maslyn Williams, who published a history of the British Phosphate Commission.

There is also a detailed manuscript diary kept by Thomas Cude, who was chief of Police on Nauru for several years until the Japanese occupation, 1942-1945.

This was a time of great devastation for Nauru. It was overcrowded with members of the Japanese garrison and their imported labourers. Most of the Nauruan population was deported by the Japanese to the distant Truk islands.

Of the 1,200 deportees, only 800 survived. After the Japanese surrender, Cude went to the islands to search for and bring back these survivors to Nauru.

Cude’s careful annotations (spidery white ink on black) to the Nauruan photographs in his own albums gave people’s names, places, context. Since paper doesn’t last long in the tropics I thought it likely that Nauruans had no such personal records. Remembering that locked library door, I emailed the Director of USP, Nauru Campus, Alamanda Lauti.

Eventually we spoke on the ‘phone. I was struck by her lively, musical, no-nonsense voice with elements of laughter behind it. She confirmed that Nauru had no such records, that she would certainly like to have copies for the library, and that they could be shared with the community. The library at USP is open to everyone, to children as well as to adults.

Formal arrangements were made between Alamanda and the Mitchell Library, and in June this year I went back to Nauru with the material.

I was amazed to find that Alamanda’s grandmother, Esther Dube Roland, was one of the survivors brought back from Truk by Thomas Cude. She was fifteen at the time. I photographed Esther with her grand-daughter, Farrah Roland Demaure, by the library door. Esther is holding a copy of Cude’s annotated photograph, a family group with her father at the centre.

Small strategically-placed islands often become the plaything of larger forces. There is much to be said about the effects of war on a country’s population, displaced by war in their own country, exiled on remote islands. Nauru was cut off from the rest of the world during the war in the Pacific. Its unique people nearly died out. The survivors returned to a homeland devastated by war.

Further, Nauru’s phosphate resources were running low, shipped away to enrich the agricultural lands of Australia and New Zealand. Australia’s proposal of resettlement for the entire Nauruan population on Curtis Island, off the Queensland coast, was considered but eventually refused: ‘We feel that we cannot secure a reasonably happy and secure future on your terms for resettlement … and we have decided on behalf of our people that the idea should forthwith be abandoned. … We are left therefore, with no option but to look to our own island for a permanent future. We will remain in Nauru.’ Nauruans celebrate their survival as a distinct human group each year on October 26, Angam Day.